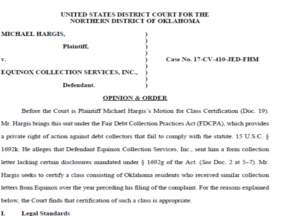 The Murphy Law Firm has been appointed class counsel in more than 200 lawsuits throughout the United States.  In the Equinox case, Judge Dowdell remarked in his order:  “Mr. Murphy’s background in consumer advocacy and his experience litigating class actions… give very indication that he will vigorously prosecute this action.”  It is hoped that the Equinox class action will provide harmed Oklahomans with a way to stop the unlawful practices alleged in the Complaint.